Recently I extended the Wavefront Ruby CLI to make it easy to open and close Wavefront events from the CLI or, more usefully, from scripts.

Here’s a quite uneventful timeseries:

Let’s create an instantaneous event. You might use this to mark a switchover to a new release.

You can see the event, and the host to which it is attached. I didn’t specify to which host (or hosts) the event should apply, so the local hostname was used. There is a -H option to the create command which lets you supply a comma-separated list of hostnames to which you want the event to apply.

Now, let’s create an open-ended event. You might do this at the start of, say, a load-test, so when you look at your charts later, it’s easy to see when the test started and finished.

When you close an event, you must supply the name of the event, and the time at which it was opened. The CLI stores this information for you, in a local state directory. For each event you open without specifying a close time (which is implicit in an instantaneous event) a file is created whose name is a concatenation of the time the event was opened, and its name. The content of the file is the list of hosts to which the event relates.

The state directory behaves like a stack. So when we wish to close the event, we can simply pop the last event off the stack.

And the event will be closed. You can also specify the name of the event, in which case the last event with that name will be popped off the stack; or you can go the whole hog and specify the time and name of the event to close. I’ve tried to make things as simple as possible, whilst retaining flexibility.

If you wish, you can specify the start and end times of your event. Times can be given in anything which Ruby’s strptime() method can parse.

If you don’t like the idea of the local state directory, and you prefer to do things yourself, you can use the -n flag to not create a state file, and -V to see the JSON that Wavefront sends back. To close the event, you will have to manually specify the startTime and the name.

The show subcommand gives you a list of events which are open and have a local state file.

If you wish to properly query events from the CLI, you should use the events() function as a timeseries.

Using the commands above, it becomes trivial to wrap something like a Puppet run, or a deployment, in a Wavefront event. But what if you want to wrap a system event? Or if you want to wrap some particular process that’s part of a batch job you can’t change? This is also easy with a good tracing tool. I’m on Solaris, so I have DTrace. I’ve had it for nearly ten years now.

Here’s a simple example: I’m going to wrap any occurrence of the charmingly named big_job process, in a Wavefront event. Then, I could run a nice ts events() query, see how many big_jobs we’ve done today, and alert if it’s too many, or too few. Or if they took too long. Or whatever.

Here’s a bit of D which will use the wavefront command to open an event when big_job start, and close the event when it stops. The name of the event is the program name and its pid, so we can cope with overlapping big_jobs. If you expected big_jobs to be happening in multiple zones, you could run this once from the global, and have the zone name be reported as well with DTrace’s inbuilt zonename variable.

Normally DTrace will not let you perform what it calls a “destructive action”. That is, any operation which changes the state of the machine. system(), changes the state, so we have to pass the -w option (waiver?) to assure DTrace we know what we’re doing and we won’t blame it if the box gets hosed. The only other thing in there that strays a little from the norm is the $$1: $1 is, just like in a shell script, the first argument to the D script. Sticking another $ in front of it casts it to a string, so the comparison works.

Run that script with the name of the program you want to watch for, and, almost magically, any time it runs you’ll see it as a Wavefront event. 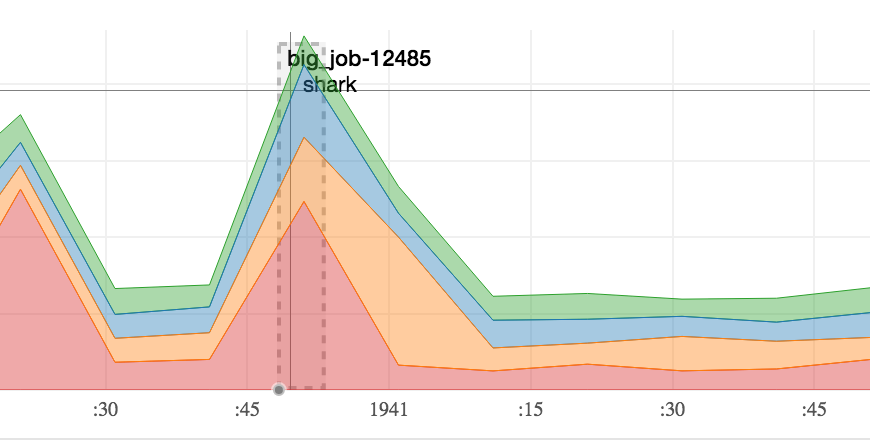 Of course, you do’t have to use proc::exec type probes: you could fire off an event on anything the system does.

For the sake of completeness, the CLI lets you delete events.

The wavefront event command is all built on top of existing library code which you can require and use in your own Ruby programs.