Gathering kstats provided us with excellent introspection onto a Solaris system, but I think there’s a lot more fun and enlightenment to be had if we can come up with a way to wire DTrace up to Wavefront.

Getting Numbers out of DTrace

Let’s start with something very simple, and use one of Brendan Gregg’s famous DTrace one-liners. Run this, wait a few seconds, and ctrl-c it.

It counts the number of interrupts on each CPU, but it does that silently until you abort the script, then dumps the whole lot on you in one go. This is not much use for generating a steady flow of metrics. If We use DTrace’s tick mechanism, though, we can output something every second, regular as clockwork. Pop this into a script called intr.d:

make it executable, and run it:

Much more useful. Notice, though, that the numbers only go up: they’re counters, and we’ll have to deal with that later.

Getting Numbers into Wavefront

We need a bit of something that can turn that DTrace output into Wavefront wire format, and send it to a proxy. We also need to make the output of the D script be input for that thing. The obvious way to do this is to join stdout of dtrace to stdin of the processor with a Unix pipe. But I think it’s more interesting to use a named pipe. Let’s treat ourselves. We don’t get to use named pipes very often. I haven’t used one in years.

Metrics need a path. If we use the name of the pipe to tell the processing script what metric path to use, that script becomes reasonably general-purpose. It script could theoretically service any number of DTrace scripts, provided they output in that same two-column format. So, to make the output of intr.d go to Wavefront with metric paths intr.cpu.0, intr.cpu.1 and so-on, begin with:

and in another window, run the processor script, which I’ll show you in a minute.

Wait a couple of minutes for a meaningful amount of data to go through, and… 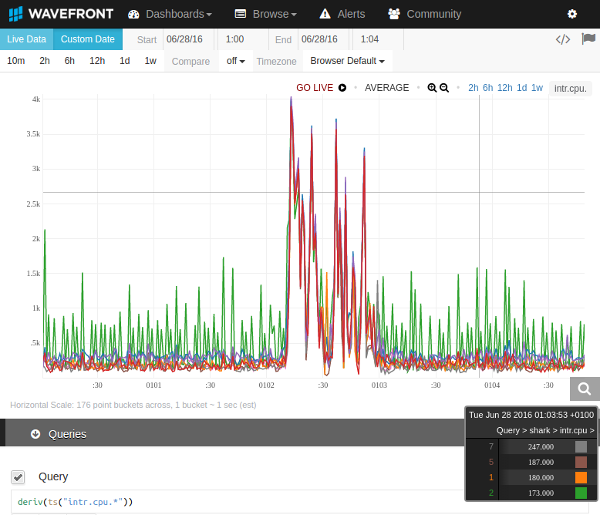 If you squint, you might see that I wrapped the time series in Wavefront’s deriv() function, turning my simple counter into a more useful gauge. The big hump in the middle was a 10-way parallel build of Apache, just to show stuff changing.

Below is the Ruby processor script which did all the work. It’s also in Github where it will probably be updated, and drift away from what you see here.

Getting More out of Everything

This is all pretty simple stuff. The next step is to make dtrace2wf more flexible on the type of inputs it can understand. It might even be nice to integrate its functionality into the Wavefront CLI. That may be seem minority-interest for a general-purpose tool, but you could just as easily read the output of one of the Linux tracing tools. One could also write a Diamond collector with similar functionality.

Back in my darkest days, maintaining a Graphite “cluster”, (I use quotes because Graphite clusters don’t really scale and aren’t really resilient, the two factors which I think define clustering) perhaps my biggest problem was developers adding new metrics, or slightly changing metric paths, and hundreds of new whisper files appearing, promptly filling the disks. Again. Graphite likes to be set up and left alone: it doesn’t deal well with change. Wavefront is different: spinning up a quick DTrace script and shoving its output into the proxy with one-second resolution and a unique metric path is effectively free, so methods like that shown above become useful.

Also, point tags let you create meaningful graphs of constantly changing data. For instance, say you want to see the top 10 on-CPU processes on the box: you could write a D script to do this, and have a connector capable of generating “two-dimensional” Wavefront data: that is, time spent on-CPU as the value, and process name as a point tags. (I would hesitate to use PID: the high cardinality could make queries very slow.) This would make for a nice point-plot chart, handling as many transient processes as need be from a single root metric path.

I think there is huge mileage in graphing the output from DTrace. (And other tracing tools.) The art of good DTracing is knowing where to look, and I think Wavefront’s simple near-real-time visualizations will make it easier to know when you are on the right track. And, to set up a Wavefront alert for next time the same problem starts to happen.

This is possible because the very low overhead of correctly written DTrace scripts makes it perfectly viable to have a bunch of them constantly running, streaming data into Wavefront all the time: data that can’t be got from kstats, or straight from a properly instrumented application. To that end, it probably makes sense to have dtrace2wf (or its successor) be capable of multiplexing various input streams.

There’s lots of fun to be had.